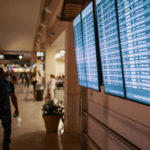 Since its March opening, the new commercial passenger terminal at Everett’s Paine Field has given Western Washington flyers a convenient option for getting out of town.

Even if you’ve already traveled through the new terminal, you probably didn’t realize that Bellingham’s Signs Plus created the signs that guide you through it, from the parking lot to the boarding gate.

“There’s no reason, in my view, to use taxpayer dollars that can go towards education, healthcare, and other causes, to build a terminal that you can’t directly get paid back for, because of the way FAA rules work,” Smith says.