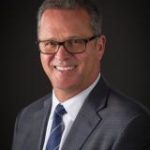 After 37 years of dedicated service to PeaceHealth, Dale Zender will be retiring.

Dale’s commitment to the community has been a hallmark of his career. In 2015, he was named the Whatcom Business Alliance’s Business Person of the Year. He was also the recipient of the rare John Tiscornia Award in 2011, honoring at least 20 years of service in recognition of his outstanding leadership, stewardship and exemplification of PeaceHealth values.

Dale has served as Chair of the Whatcom Educational Credit Union (WECU) Board, is a member of the WSHA Public Policy Committee and has been an active volunteer coach for youth sports.

Join us in congratulating Dale on his well-deserved retirement.